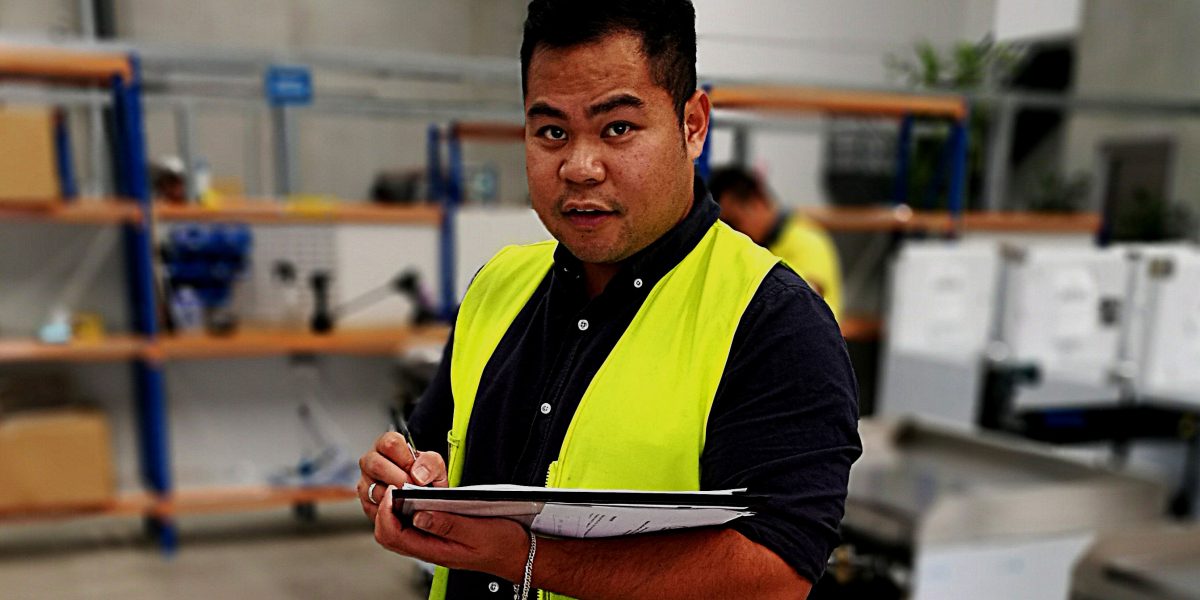 One of the benefits of being a home-grown manufacturing company is that we keep all of our design and production in-house.

That means we have a team of engineers and designers working in the same place our products are made. Not only does this give us all a sense of unity – we’re working towards the same goal – but it means we can work much, much faster.

But don’t take it from us! We spoke to someone within our product engineering team to get the dirt on what it’s like to work at Luus, why it’s so much better to have product design in the same building where you make stuff, and what the future might bring…

Phil Grijalvo has been with Luus for nearly three years. His first job after graduating university with a Bachelor of Engineering, working at Luus fulfills a passion Phil had always harboured for manufacturing.

“It’s something I’ve always been interested in, especially since I got an internship at a place that manufactured car parts. That’s when I fell in love with how things are made, and watching your design come to life.”

Unfortunately, the low level of Australian manufacturing means there are few jobs for designers in the field. Many designers end up working in technical sales, Phil says. There just aren’t enough jobs to go around.

Which is why the Luus job stood out for Phil back in 2015. It fit in perfectly with another of his passions: cooking.

“During uni I was working on more domestic products, furniture design, that sort of thing. Working on commercial equipment has a lot more to think about in terms of standards – not just thinking about aesthetics, but more functionality.”

Getting stuck into the job, something stood out for Phil: just how friendly everyone was. It felt like he was joining a family.

“I’ve worked in other places where they only help you to a certain point. But here I think people are willing to help anyone out with anything.”

The biggest benefit, though, came when Phil actually started designing products. Because the design office is connected to the manufacturing floor, Phil could actually produce proof-of-concepts quicker than ever.

Not only does that help him refine his designs even quicker, it means he can actually see and hold something tangible in his hands. It’s immediate feedback that other manufacturers can’t provide.

“When I was at uni, it was just in the computer. Now we can do scale models and it just enhances your design skills. You can see what can go wrong really quickly.”

“My first project, was two parts that had to be fitted together. Once we did a prototype I could see there were some things I needed to change. It was great to get a prototype in just a couple of days.”

If Phil was stuck in a design office overseas, with no access to the manufacturing floor, he says it would have made that entire process much harder.

“Sometimes when you import from overseas, it doesn’t come out perfect. “

Three years into the job, it hasn’t become boring. Phil says the constant push for quality and refinement always means there’s more to be done.

“My latest project is working on refinements to our fan-forced wok. It’s the first product we’ve made with electronics…and that’s been a challenge!”

“It’s great to innovate, rather than just catch up to competitors.”

And there’s more of that on the way. As one of Australia’s leading kitchen appliance manufacturers, Phil says his passion for delivering high quality designs hasn’t slowed down. IF anything, it’s speeding up.

“I like a challenge, and a job that makes me think, and challenges me – not just as an engineer, but as a person. That encourages growth.”

Are you interested in a future at Luus? We’re always looking for bright and talented people. Why not get in touch with us and see if there’s a position that’s right for you.

Get in touch with Luus